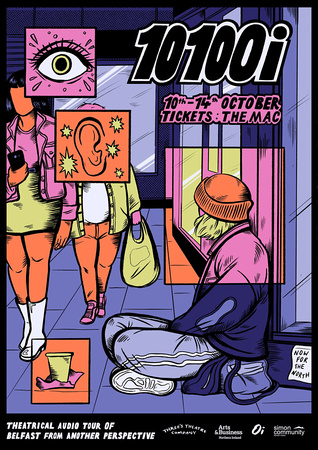 It's dawned on me that nearly two weeks have passed since World Homelessness Day, around which time Three's Theatre Company hosted their 1010Oi audio walking tour in association with the Simon Community and Outside In streetwear. You may be wondering why, with its timeliness and context seemingly gone, I didn't review it sooner. What can I say, other than I was overwhelmed?

1010Oi is a work of choice, two of them to be precise – Colm Doran's "Dinosaur", narrated by Brendan Quinn, and Gina Donnelly's "Ice Cream", narrated by Adele Gribbon. In selecting the latter I am presented with something unmistakably powerful in the moment but absolutely indelible in retrospect – a work not so much about homelessness, but loneliness, a theatrical Lost In Translation for absolutely everyone.

"I'm not a crier. Never have been. It just seems an impractical response to a problem." So speaks Gribbon as we hear Donnelly's script, based on real-life situations, through earphones as we stroll out of a warm MAC and into a sunny but chilly Belfast, the personification of community turned into a museum of isolation through sights and sounds. With nowhere left to turn, all pressure is on our narrator to open up, to emote, but how can she if she still perceives it to be as a sign of weakness? Like ice cream itself, she is not supposed to melt in the open air, lest she no longer look the part for people. The price of selflessness entwined with fear carries a heavy burden.

Appearance, and superficial desires, are paramount themes for Donnelly. Those most familiar with Belfast will, like Gribbon's narrator, think of the High Street Lidl as more than a shop, a place where everyone goes – with the tone of her voice Gribbon delectably illustrates why, to her, it is the "saddest place in Belfast", a place where it "used to be cool". Raising the stakes, Donnelly places her central figure in the path of emotional intimacy, translating prose through voice into not merely a joy, but the overjoy of shared interests and held hands – and the worrisome wonder of whether or not we deserve them. Are we worthy or were we lucky? That’s pleasure and pain right there.

Pleasure and pain that doubles as we walk on and hear of our narrator finding a housemate who moves on after an abruptly, unexpectedly truncated period of time. Take a moment to stop and ask yourself – who hasn't been there? Who hasn't thought, after the unexpected building of a bond, that nothing is going to tear it, or yourselves, apart? Who hasn't found themselves hit hard by life-changing consequences? Who doesn't remember the search for an alternative coping mechanism – which may or may not function as the suitable period of adjustment we require? The word "home" has many more meanings than just a building – it translates, above all, into warmth and stability, a place where we can feel at ease. Everyone talks about progress, but you can't move forward without foundations – foundations which won't always be there, however much we want them to be.

Even now, I still don't think I've done justice to the work. I still don't think I can describe exactly how the hurt, hope and happiness in Gribbon's voice brings Donnelly's heartfelt prose to life, and how the dreams and realities of Belfast are so skilfully and poignantly illustrated. But I do hope my words have given you an idea of how important and invaluable 1010Oi was for me and surely everyone else who plugged in those headphones between October 10 and 14 – because ultimately, if more works like Donnelly's, and certainly Doran's, are produced and experienced, it will be so much the better for all of us.