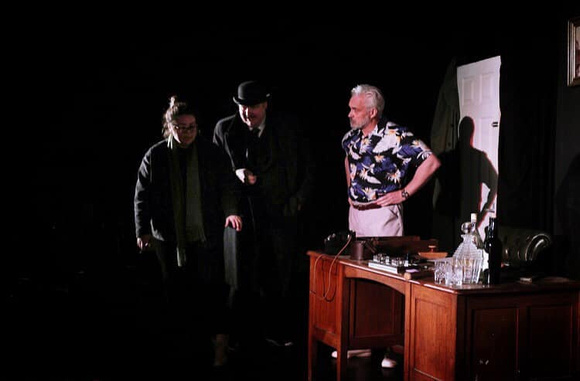 Alfred Hitchcock may have once said that there is no emotion in figuring out a puzzle, but there is plenty of emotion to be drawn from multiple actors at Belfast's Accidental Theatre on a wet and windy January night.

In a Chaos Theory Theatre and Frontier Pictures co-production, a pair of US writer-director Scott Fivelson's one-act plays are performed as a tribute to the genius within the Master Of Suspense – pastiche, homage, madness, you name it. It's all here.

Dial L for Latchkey, directed by Rachel Coffey, frankly reeks of pastiche, homage and madness throughout. The plot makes little sense, the characters are paper-thin and the humour genuinely hits bottom at one point. (In that it's flatulent.) But focusing on that would miss the point of and the joy in the genuine Hitchcockian affection held by Coffey and her cast. What this light-hearted parody does is master the Master's skill at people direction, where he would demand individuals to think and act outside the box and spread the wings of superficially pigeonholed personalities. This very unnaturalness – hilariously highlighted when a glamorous wife goes into prison speaking English and comes out speaking Russian – is key to the play's success. It's not a mystery, it's making a funny example of it, with enough Hitchcock title drops to have the guys at famed YouTube channel CinemaSins rolling credits for eternity. In short, it's a good lark.

More focused, but no less fun, is Thomas Pollock's production of Leading The Witness. Given time and freedom to create a fully rounded character, Lynn McElroy unearths the best performance of the evening as Maddy, a blind waitress in a land of guns and crooked cops. Aligning concise drama with Coffey's satirical edge, Pollock, McElroy and the supporting cast bring sturdiness, sympathy and empathy to a tightly structured script laden with humane suspense and punchy amusement. Like Hitchcock's own Rear Window, or frankly, any of his best work, it's not about the puzzle but the people behind the puzzle, and how perceptions can be fascinatingly and unexpectedly blown out into the open. Thus it is entirely befitting of the evening in general – a tribute to film-making and people in the very manner Hitchcock himself would have recognised.

A Hitchcockian Evening was staged at Belfast's Accidental Theatre from January 26-27.