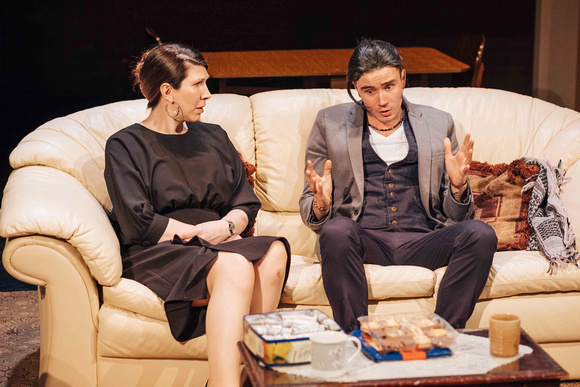 Property, character and family development are tied into each other in Erica Murray's ambitiously-scripted All Mod Cons, an especially intimate and eloquent piece which slowly burns its way to the centre of the heart and fiercely challenges the head. Directed by Ronan Phelan and featuring star turns from Mariah Louca and Michael Shea (both pictured above), the Lyric Theatre's current artist-in-residence's powerful play is about how much it takes, materially and connectively, for a house to be a home.

Louca's Jean and Shea's Gary, siblings recently re-united, and to a lesser extent estate agent Ian (Chris McCurry), and house buyer Laura (Sophie Robinson), are soulfully and meticulously examined in a steadily-paced and intriguingly crafted exploration of home and human comforts. Focusing on how some will, how some won't, and even cannot adapt, Murray and company plausibly argue about the true value of second chances, indicating that it is not as easy as we might think to simply grow up and deal with even the tiniest of setbacks. Because the little things matter, be they precious, nostalgic keepsakes or an attitude to a job or a person at any moment in time.

The world of All Mod Cons is one where being able to sell, and keep, a house does not necessarily equate with maturity, with the lines between sister & mother, and personal & professional, relationships so fine here as to be entirely invisible. The characters are constantly "stepping on eggshells" in a painfully cynical culture where everyone believes they can stay afloat without sentiment. Really, life and a home is nothing without it - a message to be heeded and never forgotten.