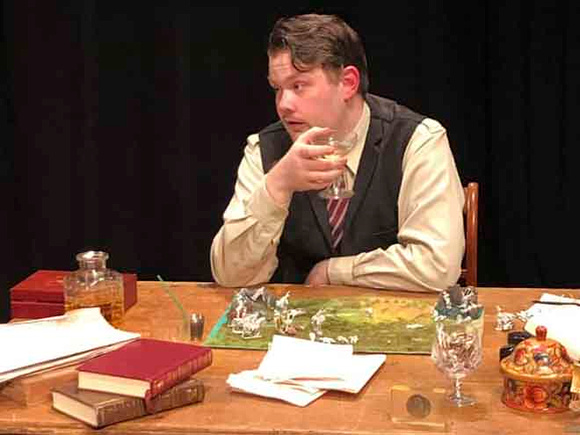 Mary Kenny's Allegiance, as produced by Footsteps NI in Belfast's Brian Friel Theatre, is a verbal, stately exercise in bonding that sends out a rich and timely message about democracy and identity. About what two sides of a freedom fighting coin could gain, or even lose, from doing the very thing the Twelfth Doctor would advise them to do: sit down and talk.

This imaginative reinvention of what happened when Winston Churchill, played by Robert Forshaw, invited Irish revolutionary Michael Collins, played by co-director Daniel McDermott, into his home in 1921, is notably slow-burning. A first act which borders dangerously on plodding nonetheless lays intriguingly wordy foundations from which McDermott and directing partner Conor Ferrin later unearth true forcefulness, both through Kenny's script and Forshaw's commanding performance.

One definite question to draw from both the historic meeting and the play is this: is allegiance, let alone democracy, even possible? Are Churchill and Collins, strictly speaking, democrats, or are they ideologists, uniting people behind a cause for the sake of personal pride and legends? There are wartime horrors to be drawn from the art of conversation: ego measurement and class divisions in the pursuit of singular goals, where dreams of genuine unity are just that: dreams.

A silence fills large parts of the play when there ought to be music, something to fill the gaps and inspire belief that just isn't there. And when we do hear music, namely Churchill's rendition of "I'm Forever Blowing Bubbles", it is a hymn to the fallen amidst the minute fragility which exists in even the best-intentioned of pursuits. A lament for a deceased girl whose life, like Lyra McKee's, ended before it even began. As such, like much of Allegiance itself, it is gently shattering. Perhaps we had the right agreement long before Good Friday – we just hadn't the right mindset to implement it. That is the power and the tragedy of both history and the production.