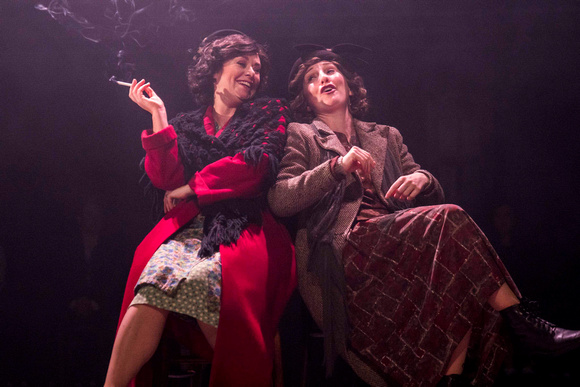 "Some leave the past far behind them. Some keep it close to remind them. Never forget the people you knew..."

It is as I, and we, remember it, if not better. Two years after its World Premiere swept audiences all through the years and through the tears of Frank McCourt’s life, Pat Moylan's musical production of Angela's Ashes, adapted by Paul Hurt and Adam Howell, returns to Belfast's Grand Opera House to even louder applause.

Certainly, I was slow to fall under its spell in 2017 - my initial reaction to the first act reflected someone who wasn't entirely comfortable with this idea of merging this music with this misery and mirth. But subsequent contemplation and a second viewing of director Thom Southerland's show remind us just what a bold and brave undertaking it truly is. To me at least, any erraticism in tone is no hindrance, it's an asset. It's a theatrical and literate meeting of two sets of minds, the increasing chimes of ambiguity in the lyrics and music washing into impeccable staging and soaring solos, a unifying, elevating strive towards a definitively welcoming voice. The very voice everyone in the theatre so embraces.

"If you can learn from your mistakes, if you can heal from your heart breaks, you'll find the strength you never knew..."

Reality hurts, but it also heals with time, as the title song implies. A message with thought and feeling, conveyed professionally and commandingly by Brigid Shine, Marty Maguire, Eoin Cannon, West End star Jacinta Whyte and a wholeheartedly committed ensemble. There are fears, tears and laughter... and there is happenstance. The kind of happenstance that defines not only this musical, but life in general, and everything we gain and lose along the way. The jobs that we didn't think we would do, the people who we didn't think we'd fall in love with, the money we thought we'd lost and didn't think we'd raise again, the old dreams we are forced to surrender and the new dreams we build. They're all here in this still unique story of generations, emigrations and immigration, a tale of honour, empathy and love loaded with the sort of razor blunt wit which encourages us not to lament the memories of what we leave behind, but to be inspired by them. It's been asked if in truth, there is no beauty - but in Angela's Ashes: The Musical, the beauty is in the truth.