Beauty And The Beast 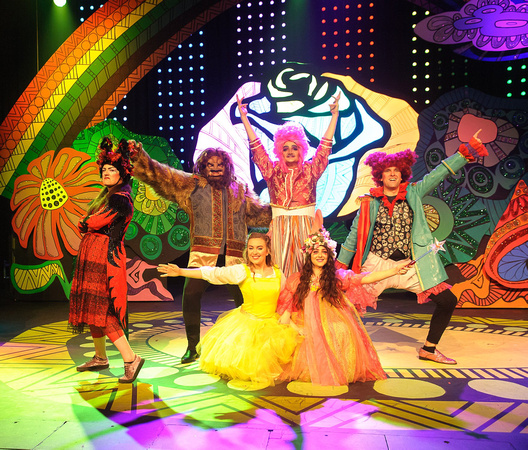 Like not one, not two, but several pantomimes rolled into one, Patrick J O’Reilly's version of Beauty And The Beast comes right at you like a ludicrously speeded up merry-go-round and dares you to let go. Which, of course, we don't, because multiple pop culture references, twin singalongs, several paper-thin disguises and twenty literal stink bombs later, Armagh's Market Place Theatre feels as manic and magic as Debra Hill's captivating, cheery Fairy Pretty is after she initially invites us to Armagh, I mean, Armadilla City.

From the very moment Hill, showing off her chops as a born comedienne, er, "flies" across the stage with a high pitched "wheeee" you sense you're immediately in for something recognisably chuckle-worthy and charming. Led by Neil Keery's hilarious Nanny McGee, a dame so ugly she made One Direction head in another (the writers' joke, not mine!), an exceptional cast keeps pace with O'Reilly's hugely inventive mind every step of the way, possibly exhausting themselves but delighting everyone.

Without spoiling too much, Beauty And The Beast contains a mixed up, muddled up, shook up world where girls can play boys and boys can play girls. A world where good jokes amuse and bad jokes drive you crackers. A colourful, crazy world which almost steals the show entirely from the central story of the cursed, beastly prince (Rhodri Lewis) and beauty (Tara Greene) destined to fall into each other's arms. That is, unless Prince Ponce (the brilliant Keith Singleton) and Fairy Rotten (Rosie McClelland, reprising her Waterfront role from last year with added force and confidence) has anything to do with it – and they are consistent scene-stealers in their own right. As is Tara Greene, transcending the this-guy-or-that-guy ultimatum at the core of Belle to give us a feisty heroine who, along with Fairy Pretty, chuckles as maniacally as the bad guys when it seems the "heroes" will triumph over the "villains". What surprising, and refreshing, substance for the audience of all ages - the damage and thoughtlessness that arises from the pursuit of ambition. Never mind Disney's Aladdin, there's a whole new world for you.