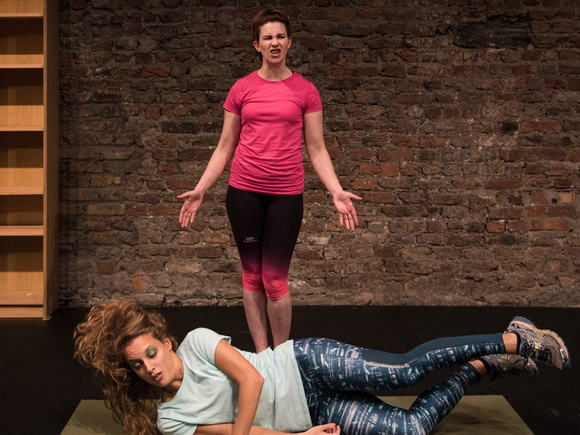 The true meaning of Billy, directed by Sarah Gordon from a script by Gordon and producer Alice Malseed, rests not merely in a product from the Swedish furniture giant that inspired it but the impact of same said giant on people's lives. One is willed into thinking about, mainly, Ikea and how their building blocks, their tables, chairs, desks and everything else have become our building blocks in a societal comfort zone. And we see exactly what happens when many characters, performed to the hilt by Cork's Aine Ni Laoghaire and Belfast's own Greek Maiden Voyage Dancer Vasiliki Stasinaki, attempt to break free from that zone - maddening, nervous breakdowns as uniquely entrancing performance art theatre.

It is impossible not to marvel at how Malseed, Gordon, and their stars, voiceover man Keith Singleton included, dissect the modernity and mundanity in everyday living in relation to the human pursuit of life, liberty and happiness. Relaxing conformism is broken down and retreated to with imaginative jolts of energy and expression, with Stasinaki rampantly chaotic and Ni Laoghaire unsettlingly controlling. They're more than human, they're the cycle of life, distilled in unpredictable physical and vocal marvels. They, and Billy, are a natural and thoughtful reaction to the culture of supposedly easy solutions around us and how one deals with it, an ongoing tug of war between reflection and sentiment. And have I also mentioned that it's relentlessly funny?