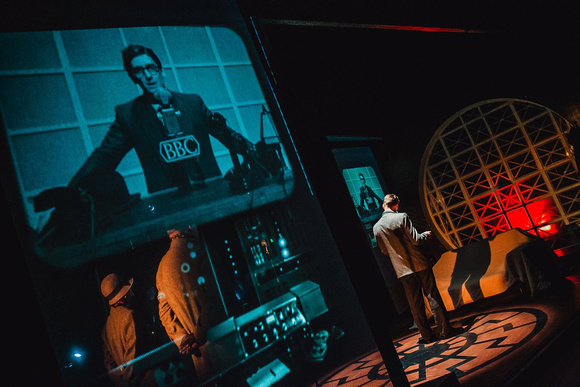 There are no real winners in Jimmy Fay's marvellously staged production of Thomas Kilroy's uniformly excellent Double Cross, except those perceived as such by a crowd in thrall to the most persuasive and charismatic of public speakers. It is chilling, revelatory work, immensely discomforting in its unveiling of how minds can be warped in the name of ideological beliefs.

Set in World War II, Double Cross is a literal double header for the audience in the Naughton Studio of Belfast's Lyric Theatre, who are invited, from either side of the stage, to observe the actions and mentality of first Brendan Bracken, then William Joyce.

One was Churchill's Minister Of Information, the other, aka Lord Haw-Haw, was Hitler's "puppet", a mouthpiece for Nazi propaganda. The former is obsessively fascinated with the latter, the latter equally obsessive in determining his lack of success - at a personal and professional cost.

Applied to another great Ciaran Bagnall set are projected "newsreel footage", and radio broadcasts, to set the scene for both Bracken and Joyce to have their prideful duplicity painfully and truthfully exposed in a courageous portrayal from Ian Toner. Multiple role-players Charlotte McCurry and Sean Kearns are as good as they have ever been, skilfully complementing Toner and heightening the production’s emotional and literate conviction.

Double Cross is also relevant in reflecting the short-term inner comforts and long-term outer consequences of isolation, the latter rearing their ugly head in past and present-day climates where no one really knows how transformative the most seismic of choices can and will truly be. In every sense, Double Cross is a dramatic, historic and contemporary triumph - frankly, it's a masterpiece.

A co-production between Belfast's Lyric Theatre and Dublin's Abbey Theatre, Double Cross runs at the Lyric, as part of the Belfast International Arts Festival, until Saturday October 27th, before moving to the Abbey from October 31st to November 10th.