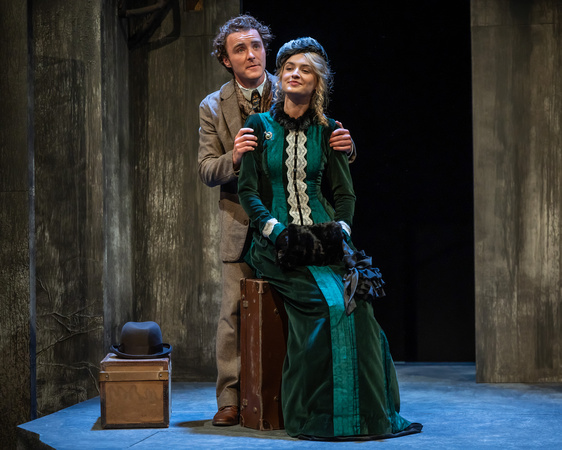 Steven Cooke as Jonathan Harker, and Sophie McGibbon as Mina Westerman, in
Dracula. Photo courtesy of the Lyric Theatre

The context of Dracula, adapted for the stage by Liz Lochhead from Bram Stoker's classic and directed by Philip Crawford, is unavoidable - the youthful cast from the Lyric Theatre's Drama Studio performing live in the direct aftermath of an unprecedentedly challenging time for everyone within live performance as a whole. Merely being in the Lyric is akin to the therapeutic calm after a torrential storm, a real feeling of being part of the momentous teamwork which, reassuringly and safely, reunites everyone who loves both watching theatre and being part of it in an atmosphere both familiar and novel. Rest assured, however, that said atmosphere doesn't upstage the show which will follow - it is instead both fittingly and marvellously reflected in Lochhead’s fierce, fragmented script, Crawford's skilled direction and the tremendous efforts of the youthful cast.

The story is approached through the relatable prisms of class and mental health, one a foundation for the souls within, the other a troubling definition for the action without. Humour, and light character drama, is embraced early on with Westerman sisters Lucy (Holly Demaine, electric) and Mina (Sophie McGibbon, remarkable), who exhibit vitality and comfort respectively in individually expressive, soon-to-be-ripped-apart routines. Their "zone", one of three elements central to Stuart Marshall's set, is a bedroom & dining room – the direct opposite of the prison cell which houses the permanently scarred RM Renfield (Dylan Breen, astonishing), whose rants repeatedly fall on deaf ears. In the middle of it all is a not-so-wide open space in front of crumbling castle walls and leafless, thin-twigged trees – instability and nihilism personified. It's like a widening gap between trusted privilege and ignored paupers, but with neither side entirely happy.

It's also the ideal set up for a spellbinding psychological tapestry, where the count himself (Kevin Canavan, immense) is always there in spirit. As unavoidable counsel and confidante to solicitor Jonathan Harker (Steven Cooke, impressive), he is the ultimate trigger for the irrationality to be presented in Harker and his ilk. Dracula is forceful contagion full stop, superficially commanding on the surface, enduringly nightmarish in consequence. The vampire who claims to like the "simple things" also argues that there are "at least four sides to any question", with one answer echoing what seems to be, and the other answer, in its effects on Jonathan, Lucy, Mina, Renfield and every other major character, echoing what will be – a loss of control and the emergence of multi-faceted, horrifying instability befitting of both Stoker himself and the finest of contemporary dramas.

Classic symbols like stakes, crucifixes and of course sharp teeth do make their mark, but what stand out most in this version of Lochhead's Dracula are the series of valuable insights into the aspirations and fears of mavericks and role models, all of which spread themselves out and influence everyone in a poetic, powerful tale filled with bite and zip. It's like hitherto unheralded complications thrown out in the open for our consideration – all packaged in a fresh, thrilling and thoughtful discovery after the most challenging of times. In short, a successful end to a new beginning.