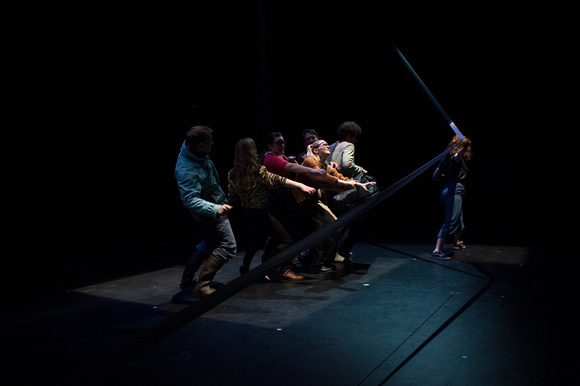 If Tinderbox Theatre’s Ignition 2019 was A Midsummer Nightmare’s Dream, a barely concealed cry for help in an explosion of energetic choreography and familiar verse, then Tinderbox’s collaboration with Manifesto Poetico, Engine, is an Ulster Fry with a very black pudding – a Hard Border Patrol redrawn as an often hilarious but often unsettling cauldron of chaos.

Gathering a real who's who of theatrical talent from Belfast and beyond, among them Louise Conaghan, Louise Mathews, Shaun Blaney, Aimee McGoldrick, Debra Hill, Lisa Duffy, Rhodri Lewis, Neil Keery, Keith Singleton, Muire McCallion, Daniel Kelly, Dan Leith, Maggie Cronin and Julie Lamberton, directors Carlos Garcia Estevez and Paige Allerton have pretty much "done a Tinderbox" - tossed typical structure and planning out the window for the kind of storytelling that doesn't know the meaning of the word linear, but is full of fiery actions within to counteract icy fears without.

Said actions are the focal point of the island of Ireland on "Brexit Day", re-imagined by the company on the Brian Friel Theatre stage with a white tape "border" as haphazard as the play itself. This is the setting for several topically familiar but tonally unpredictable news sketches: immigration, politics and livelihood as light and heavy art with light and heavy hearts in a relatively short space of time. It’s the most darkly contemporary aspects of our culture in a child’s playground, life as a form of theatre that is equally a definition of art and what it means to be an artist, open-mindedness at its best.

Engine ran at the Brian Friel Theatre, Belfast, from October 11-12.