Every Day I Wake Up Hopeful & East Belfast Boy 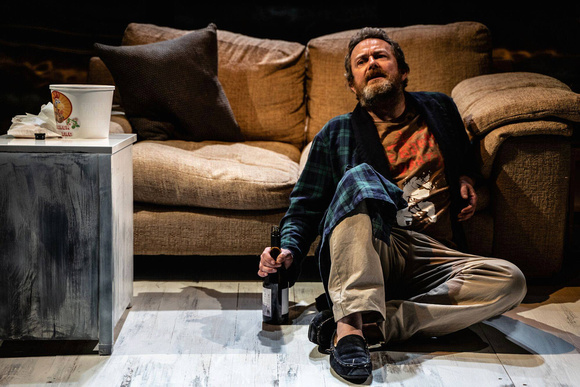 The return of Every Day I Wake Up Hopeful, directed by Rhiann Jeffrey from a script by John Patrick Higgins, and East Belfast Boy, directed by Emma Jordan from a script by Fintan Brady, carries with it a timely and urgent vibe, touring the island of Ireland during a month of increasing uncertainty.

The kind of uncertainty which repeatedly weighed down my own mind as I tried to nail just why I found these works even more powerful than when I first saw them, and then when I saw them again. What I saw last year was numbing. What I see now is shattering. Something surely too close to the bone for any artist's liking. Something... intimidating.

Every Day I Wake Up Hopeful is very aptly named - it is a metaphor for meandering, one man's struggle against mental health as well as a reflection of the struggling, aging creative's mindset. Hope extinguished by reality, idealism quenched by apathy. Apathy, the killer of dreams and futures, the deadly mentality which Higgins has captured so exquisitely along with director Jeffrey and solitary performer Simon O'Gorman.

Removing last year's swimming pool and pop music, which on reflection diluted the piece as originally performed, the full potential of the humanity within comes through, primarily from reliance on O'Gorman and O'Gorman alone. His Malachy is someone for whom conformism seems anathema - simply sitting back and accepting that "it is what it is" is out of the question for him, but his state of mind has neither the desire nor the initiative to live life as anything other than a series of accidents. Every day he wakes up hopeful - and every day said hopes dissolve. Lather, rinse, repeat.

Higgins is wise enough to balance the grim with the amusing, and O'Gorman's delivery and expressions are perfectly attuned to the script. There are shades of Danny Boyle's brilliant T2Trainspotting here - another figure of indifference who thought his ultimate decision to "choose life" might be right after all was only sent right back where he came from, if not worse. Detachment became despair. But it need not be so for Malachy and his ilk - by opening up to us, especially in the manner O'Gorman does, there is at least a chance that they will be able to move forward.

Would that the same could be said for the deranged, hypnotic Davy, the East Belfast Boy of Fintan Brady's play. He, and the play itself, are harder to warm to, but to be fair their intents and purposes, despite frequent amusement and even more amusing audience participation, are the complete opposite of comforting and warm. Ryan McParland is peerless as the title character, his moistened lips, bug-eyed nerves and hypochondriac tendencies spelling out a state of hyperactive hip-hopping that immensely unsettles. Imagine if the man who walked down You Can Call Me Al's street came to life in an extremely intense atmosphere, and you'd have someone a bit like Davy. Someone who's got a short little span of attention, whose nights clearly are long, and who definitely needs a shot at redemption before he ends up a cartoon in a cartoon graveyard.

Like Malachy, Davy finds it - with us. And as with Malachy, the distance between perceiving Davy as sympathetic and pathetic is exceptionally minute, yet the dedication and thoughtfulness of the actors and the crew ring true. Watching and learning from both productions all over again is like a therapeutic epiphany - a viable and valuable tonic for the state of heart and mind. More of the same please, Prime Cut Productions.