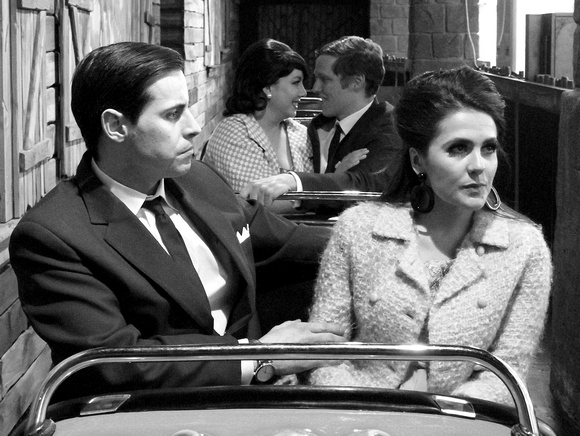 There’s something seductive and tragic about Brenda Winter-Palmer’s Keep Telling Me Lies. A venture fourteen years in the making for actress Antoinette Morelli, the production documents the lives of two women, Rose (Morelli) and Lena (Bernadette Brown) alongside those of their young selves (Mary Frances Loughran and Brigid Shine) to the sound of music, themes of humanism and a superbly designed backdrop of Belfast’s beloved and iconic Floral Hall.

The familiar path the play traverses – the limelight vs. reality dichotomy – is walked with colourful vibrancy and grim thought. As Rose and Lena recall the aspiring singers they once were and wonder, along with the Floral Hall no doubt, where they went, we’re encouraged to enjoy and contemplate a two-for-the-price-of-one play where the real stage fright has little or nothing to do with what actually happens when you’re singing.

Indeed, when the cast sing, which is quite often, it is always a joy to behold. Central to Keep Telling Me Lies, are, as the title suggests, the lies that keep being told, unlocking the realities that never flew in the face of surely anyone’s teenage dreams when they actually could believe in magic. It’s about placing desirable opportunities in the hands of unintentional opportunists, the juggling of high-profile careers with family life, the confusion of true love with love on one’s own terms a la Citizen Kane, what constitutes priorities, what really counts as success, and a tale of girls adapting to adult responsibilities before they’re really ready while their "boys" (Matthew Forsythe and Brian Paul Markey) appear to be battling like mad against becoming men. It's worth every penny.

Keep Telling Me Lies ran at Belfast's MAC Theatre from Thursday May 9 to Sunday May 12.