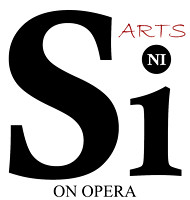 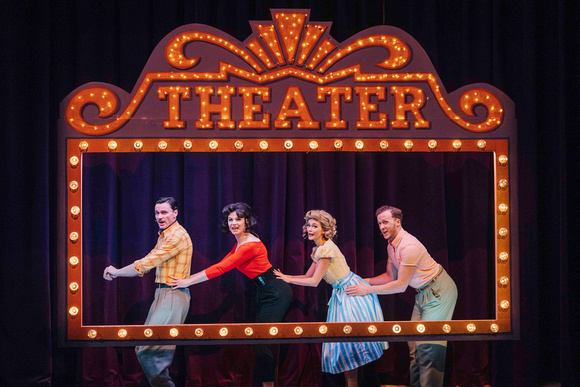 It's an intriguing journey we've been taken on since Walter Sutcliffe took the reins at NI Opera, and his idiosyncratic and intimidating, but also intelligent and strangely, slightly idealistic, production of Sam and Bella Spewack's Kiss Me Kate is possibly his best work with the company to date – a tonic for and the tone of present-day society wrapped up in the plotting of a famed British bard and the music & lyrics of Cole Porter. So intimidating, actually, that I struggled for days to write about the way in which Sutcliffe, assistant director Oisin Kearney and their exceptional cast of a hardly unlucky thirteen weave narcissism, egotism and petulance into a communal, colourful cauldron. It’s a paradoxical and downright staggering combination, numbing yet equally necessary as education and entertainment – self-image-above-all-else compellingly repainted, in broad strokes, as a mismatch of characters and characterization calling for command, for attention... and for help. How’s that for multi-faceted?

Not to mention controversial. No less so than the production's carefree misogyny which arguably goes over the edge into a more misanthropic canyon, black humour and dark realities converging over very bubbly and very boisterous song and dance. Anyone who is familiar with Porter's work will know that what we see at the beginning isn't just Another Opening (Of) Another Show – it's both contradictory and challenging. What's masterful about this opening, and indeed, much of the inconsistently toned but fascinating romp before our eyes, is the pleasure we cannot help but take from this pressure cooker – Jennifer Rooney's sparkling Busby Berkeley-esque choreography transforming the likes of Jolene O'Hara, Maeve Byrne and Brigid Shine into devious, devilish angels. It is, as the story line will be, both sides of a coin played for pleasure and pain – which is quite fitting for the narrative before us. 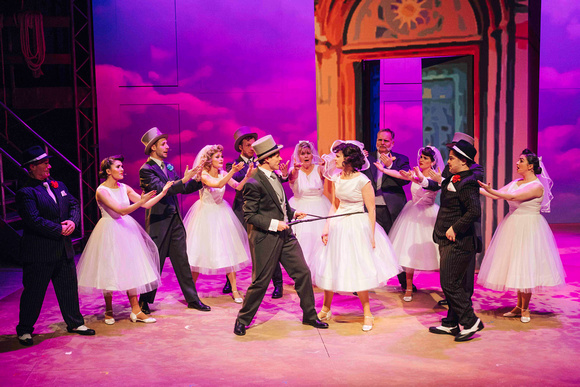 Devious devilment, with sprinkles of light relief, reeks in and oozes out of the hearts and minds of our leads. Pivotal to this mesmerizing mess is not-in-the-slightest-bit Messianic Fred Graham (an excellent Norman Bowman), the epitome of a wannabe micro-managing control freak. As a theatre director, and the alter ego of Petruchio, who he portrays in the production-within-the-production of The Taming Of The Shrew, Fred is immensely grateful for William Shakespeare's words, but you are left consistently wondering what Big Will would think at Fred's re-interpretation of his work. (Which, I am sure, is the intention.) His co-star and object of his affection, Lilli (a stylish and passionate Melle Stewart) is another all-about-the-self sort. As with Petruchio and Katarina, Fred and Lilli are pretty much at each other's throats. Their desire for each other is fueled by their striving towards a cause, the thrill of a never-ending chase. What good is love if it crosses the line into objectification? This objectification is examined further with the sparks that fly between our play's Lucentio, Bill (a remarkable Jack McCann) and our Bianca, one Lois Lane (Jayne Wisener, never better). Except in their case, you feel the navel gazing is more one sided, a rare spring of honesty looking up to the pedestal of a mildly vulnerable but mostly mischievous minx.

Therein lies the double-edged sword in Kiss Me Kate. The dynamism and atmosphere, highlighted most impressively in an on-and-off stage, Matthew Cavan-led Too Darn Hot, and the life and humour, brought to the fore in Marty Maguire and Darren Franklin's Brush Up Your Shakespeare is irresistible on the surface but uneasy beneath. The bravery Sutcliffe, and Kearney, have shown in wearing the production's most winning appeal and most pointed messages on its sleeve has given us something undoubtedly iconic and deliberately dubious at once. Fred and Lilli alone echo the most unlikely appealing screen chemistries in cinema history, those that burgeon not through immediate intimacy but through conversational bonding. A bond that extends to everyone else in the cast, Richard Croxford, Allison Harding and Raymond Walsh included. Yet in this group bond rests an immense longing for individual gratification, repeatedly roughing up a smooth cocktail that mirrors the best-laid plans and intentions of everyday life. The feeling is that of a breathless, thrilling theatrical journey - as far as that goes, it may be hard to top this year - but also one where the characters' motives can be easily perceived as crass and provocative when volatility calls for calm unification. With that in mind, Kiss Me Kate goes beyond mere surface appeal and presents us with an perfectly-timed example of confused emptiness for today's confusing landscape - a not-so-beautiful day in the neighbourhood that nonetheless encourages you to leave the Lyric with a smile on your face, a spring in your step, and... er... brush up your Shakespeare.