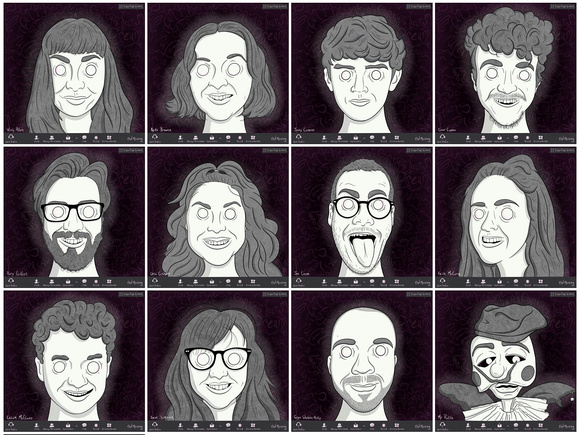 A contemporary cuisine of devastation and development, or devolution and evolution, Tinderbox Theatre’s Lucid, the latest Ignition of creativity from Patrick J O’Reilly’s Play Machine, is an appealing and poignant piece of Zoom-driven theatre, the result of sporadic injections of fiery fantasy into an age of sober reality brought upon a talented ensemble by the necessity of distancing. It is a play about a group of villagers who may be locked down but are not locked in - people who take an intriguing journey to realise that a fact of life need not be a state of mind, in a world where expression is still possible, and still powerful.

Lucid - otherwise known as Mr Ruffle And The Truffle, for very interesting and amusing reasons indeed - envelops and develops a situation which induces fear, doubt and panic in the villagers involved, or even the actors playing the villagers. The still oh-so-sudden shift from one way of life to another, both in character and actor, is the emblem of a lost dream, like a clipping of a social butterfly’s wings. The butterfly is now a very hungry caterpillar whose diet has regressed to both small and large crumbs of comfort. And that doesn’t only apply to food, but to truly being human - something O’Reilly and his team both fully grasp and dramatise well.

The moments of helplessness and rare sparks of hope amidst confusion are depicted rather extraordinarily. It’s a maddening example of longing that’s on show, seemingly not too far off the level of a roaring tiger who didn’t just come to tea but broke all the crockery in the kitchen, albeit in frustration and regret. It’s that effective. (Be glad, then, for the period of calm reflection in the aftermath - as I certainly was.)

Lucid is something special. It’s the epitome of imagination in a fevered dream, the product of the emotional spectrum taken to extremes and distilled to the essence of a not new, but endlessly developing normal. It features, prominently, the desire to escape from confusion and repetition into consistency and stability - a timeless theme even in the run up to these life changing recent months. Most importantly, it is encouraging - a mirror held up to life as neither a clipping of wings nor the death of a dream but a process of rebirth, rebuilding and rebonding. It will take time - but we’ll get there.

Lucid was broadcast online by Tinderbox Theatre Company on their YouTube page, on Friday 19 June and Saturday 20 June. For more information, a feedback survey and the chance to donate to the company, click here.