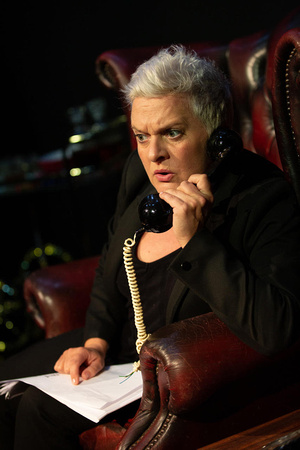 The title of Rosemary Jenkinson's Mayday!, directed by Richard Lavery and starring Jo Donnelly as the soon to depart Prime Minister, is most appropriate. In the now passed month of May, Mrs. May announced when her final day as premier would be, and a call for stability while everyone's futures increase in uncertainty is getting louder still. With May Day, comes Mayday...

Stability. That's an interesting word. Stability can be easily perceived as a lack of ambition on someone's part, being content to maintain the status quo without really achieving anything. The reality is so different. No stability equals no foundations, and no platform for success. It is essential. Retaining a level head while, as Mr. Kipling said, all around you are losing theirs, is an achievement in itself.

This is one of many issues Jenkinson, and the terrific Donnelly, raise in a one-woman, forty minute tragicomedy that defies its apparent slightness beyond words. It is an eye-opener into the arena of leadership itself, where one can't just come and go without making an impact. Where one can be both powerful and powerless. Where wearing one's heart on their sleeve is frowned upon amidst constant demands for a show of strength. This Theresa May really is "All By (Herself)" at the start of the play - the ongoing Deal Or No Deal at the heart of the Brexit situation has taken the figure of fun right out of her and she's battling hard to find it again.

It really is extraordinary how much thought Mayday! inspires about politicians as people. People who, in an increasingly mass and social media dominated culture, are becoming ever easier to pigeonhole, caricature and keep a distance from. Politics, in every landscape, can severely split opinions and the populace over the most petty and petulant of differences - when does criticism, and praise, stop being professional and become personal? As it happens, the distinction is almost invisible here, and rather frighteningly so. There is really no venom in Donnelly's May - only an almost empty shell worn down by following a series of avenues to the same dead end of alienation. At that point, there's no one left to rant at but an empty room, especially when her only companion - a cardboard cut out of Jeremy Corbyn! - is pushed off stage. And that's the strange sadness of it all. It is as if Jenkinson is saying that the open-minded rationality to stop, look, think and listen about the right future for us all may always be impossible - so let's counter our continuing struggle as best as we can. With the gift of satire.