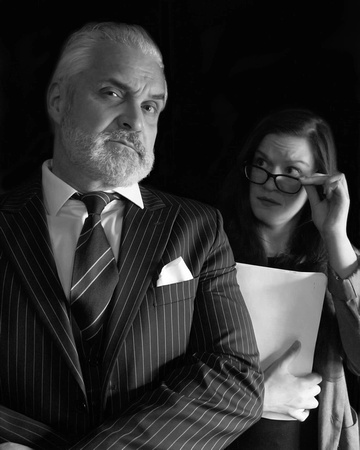 Me And EU, directed by Rachel Coffey and starring Derek Dubery and Christine Clark, is a case of superficial chaos re-imagined as a small slice of intelligent satire – rough and raw but indisputably incisive, energetic performances elevating a turbulent and timely work-in-progress script.

Timely, in that the Chaos Theory Theatre play makes its debut at Belfast's American Bar just days in advance of Boris Johnson being elected the country's next Prime Minister. Turbulent in that it toys with the possibility of Johnson's persona filtered through David Brent – and presented as Dubery's Davis Butterworth, the fictional MP originally made famous in BBC NI's Soft Border Patrol.

Like Brent, it looks as if Dubery is playing Butterworth as an easy-going horror show – a clumsy clown who is neither erudite nor eloquent, the complete opposite of what we want our leaders to be. Imagine the prospect of a politician who isn't packaging his words as soundbites for populist consumption, but genuinely believes what he says.

On stage, when interviewed by Clark's presenter Marie Devlin, Butterworth highlights his public school background as being reason enough for people to listen to him, as submission to authoritarian class privilege. He misconstrues his words. He can't pronounce Irish names. He thinks walking to food banks more often will keep the poor fit. He baffles us all. And he drives poor Marie up the wall, to the point where she storms out and we, the audience, are left to ask the questions. By the time she returns she has hit the bottle and is protesting loudly with her best Arlene Foster expression. It's hilarious, and slightly terrifying.

But our sympathies complicate in retrospect. Why does Marie storm out? After all, she is paid to be professional enough to handle anyone. Have circumstances really amplified to the point where no one could take anymore, or is she merely angry because he won't fit her conceptions of what she wants the world to be? Yes, Butterworth may well talk nonsense, miss the point and be obsessed with style over substance. But Clark smartly counters this by portraying Marie as rather controlling, an ordinary woman consumed by a pre-conceived ideology of her own, who isn't prepared for anyone not playing her game. It doesn't matter, Me And EU argues, what side is more noble, or fair - extremism at either end of the scale is unhealthy, as is wanting someone to be open-minded on your own terms. And that's what helps Me and EU go beyond Brexit, or even politics per se - it's as much an examination of its subject as of its people.

Me and EU was staged at The American Bar, Belfast, on Saturday July 20.