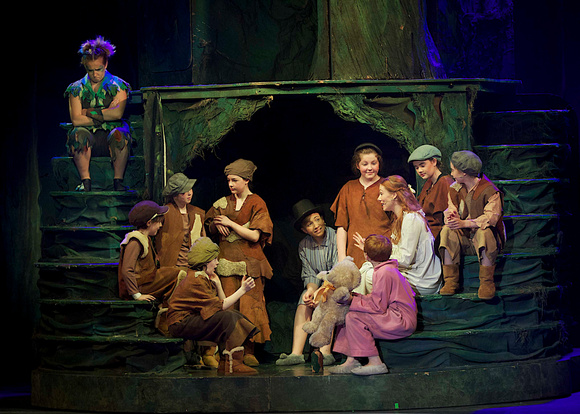 Innovative to a point, sometimes visually dazzling, but never forgetting where its focus should and must lie, the Millennium Forum's production of Peter Pan is an event by people, for people and about people, where true magic is found less in technique, endearing though that is, than in heart and thrust.

Pantomime and structure might usually be anathema, but pantomime and identity, relative to beloved characters and location, cannot be. That's Peter Pan's modus operandi for you – to be as distinctly Derry-Londonderry as any panto in that city can and should be, without veering too far away from the most familiar elements in that popular story of a boy who never grows up.

Director Jonathan Burgess, choreographer Venessa Chapman and writer-producer David McLaughlin scale back the aesthetic ambition of last year's Jack And The Beanstalk for something less lavish and more relaxed. Therefore the emphasis is not so much on the special effects – the strings which make our heroes "fly" and a crocodile's "feet" are clearly visible, but one really doesn't care – and more on the on-stage banter and impressively performed musical numbers.

Save a sketch with mermaids that falls slightly flat, genial appeal is maintained through a combination of obligatory political and cultural references – Derry Girls naturally included – and the general comedic, adventurous chemistry among the performers. Ellen Hasson is a charming lead, Conor O'Kane is a frequently funny and often hilarious Smee, and William Caulfield brings his now dependable gravitas to a truly boo-worthy Captain Hook. Most impressive is Kathryn Rutherford, by equal turns poignantly maternal and dynamically feisty in the challenging and accomplished dual roles of Mrs Darling and Indian princess Tiger Lily. 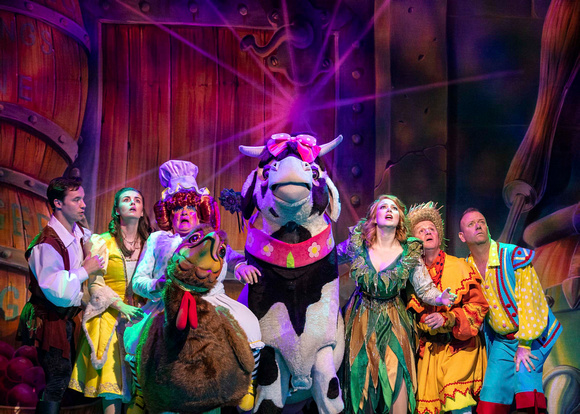 Poignancy is present over seventy miles east as Belfast's Grand Opera House take on Jack And The Beanstalk, but to a lesser extent. A lot of that is in Joanna O'Hare's all-too-brief cameo as Mother Nature, her sweetly understated gentility an ideal and occasionally special accompaniment for a game ensemble.

Her performance of "Come Alive" from The Greatest Showman is the high watermark of a production which shines more through a multitude of impressive moments than as a fully satisfying whole. Although director Andrew Wright, to his credit, isn't afraid to try several new and interesting things, the proper, convincing connection between cast and audience that any panto needs to elevate itself isn't quite there. The central love story between Jack and Princess Apricot (Michael Pickering and Georgia Lennon, trying their best) feels like a genuine afterthought amidst everything else.

But at least there is much for the audience to like in that "everything else". The show gets off to a great and genuinely unsettling start when a poor brownie "disappears" in the villainous giant's fist, opening the door for set piece after set piece, and gag after gag, to grab our attention and raise hearty chuckles. Stalwarts May McFettridge and Paddy Jenkins are as reliably funny as you can expect them to be, the former getting the opportunity to "fly" over the audience in a now traditionally brilliant effect from The Twins company. There are also two very creatively choreographed performances of "Talk To The Animals", a possibly embarrassing but entirely ingenious kind of audience participation, a devious and amusing villain in David Bedella's Abanazar, and spectacle from the Belfast Roller Rollers – all on a very detailed and vibrantly cartoonish Ian Westbrook set.