Now For The North 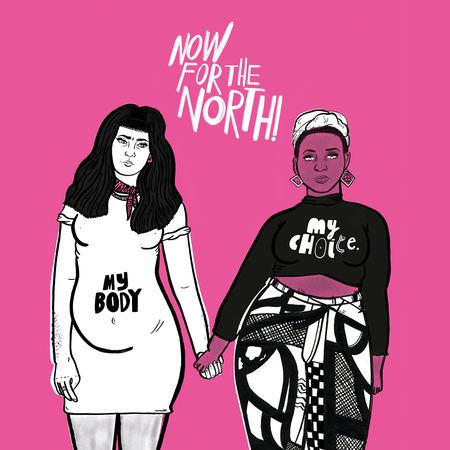 Men and women can feel as trapped by their lives as babies are in the womb, with no certainty whatsoever of how everyone else's choices, let alone their own, will determine their eventual fates. Such a theme is paramount in Three's Theatre Company's eloquently affecting Now For The North, an intelligent exercise in physical and emotional sensitivity relayed by a plethora of complex personalities.

Using almost the entirety of Belfast's Lyric Theatre, stages aside, co-directors and writers Seon Simpson and Colm Doran, and writers Gina Donnelly, Emily DeDakis and Gavin Turtle, present Now For The North, like the Date Shows, as a series of immersive vignettes making full use of the size, shape, space and design of rooms, hallways and stairs in the venue.

Each individual piece, be it written, choreographed, acted or recorded, is meticulous in attempting, lightly and laudably, to ensure we either recognise or relate to every point-of-view we hear and see. The topics of abortion and the right to choose are painstakingly expanded into the right to choose full stop over what matters to us most, a topical issue with universal appeal.

This comes through most clearly in an exceptionally well-acted conversation starring Rosie Barry (in one of three fine portrayals) and Elisha Gormley. Whereas Barry can happily muse on the relative trivialities of coffee drinking, pop culture, and travelling, Gormley is much less fortunate, her fourth-wall-breaking monologues to the audience intermittently and beautifully illustrating discomforts with unexpected and abrupt realities brought upon by a premature transition to adulthood.

It's an astonishing performance, one of many suffusing and supplementing an atmosphere as heartwarming as it is heartbreaking. The production's remarkable even-handedness passes into Cailum Carragher's twin portrayals of a male perspective, firstly alone, and secondly aided by Gormley. Both times he is pressurised to stay strong, to put what his partner or lover wants before what he wants, but the ramifications ripple and explode - on all sides. Then there is the incredible Lizi Watt, acting and dancing a never-ending battle for freedom from both pressure and confinement three times over. Observed within, without and on the dance floor, hers is also a fight for compromise that, tragically, looks unwinnable - a seemingly unattainable third dimension of clarity and open-mindedness in a bid to genuinely improve ourselves as people. At a time when support, acknowledgement and encouragement is as necessary as ever, Now For The North stands out as an indelibly captivating work - a call for understanding and heroism.

Now For The North ran from May 23rd to 24th at Belfast's Lyric Theatre.