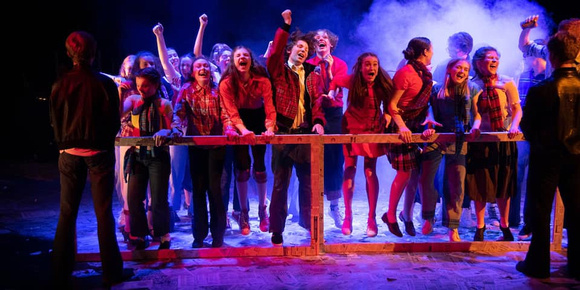 Perhaps the best way to understand and embrace Paperboy, returning to Belfast's Lyric after a successful run in the same venue last summer, albeit with a few amendments (read my Big List review from last year here), is to imagine the possibilities of being a paperboy for the first time. As Tony Macaulay was when he embraced his first job, as a teenager, in 1970s Belfast. Place it in that coming-of-age context and you get more than the musical we watch at the Lyric. You get what it's like to be reminded of that extra piece of human chemistry which turns a good job into a great one, and friendships into romances. And the pain of what happens when said chemistry is not necessarily reciprocated, leading towards frequent, comforting retreats into a fantasy world.

That's the continuing power of Paperboy, adapted from Macaulay's memoirs by Andrew Doyle and Peter "Duke Special" Wilson. It's like a sing-song prelude to Derry Girls from two decades before, idealism from the eyes of a dreamer whom many believe has few, or no, ideals or dreams to pursue. As played by Si Arts NI Best Actor nominee Sam Gibson, the young Macaulay is an flawed but appealing anachronism in a city out of time with himself, but only because he is too naive to be anything else. And it Gibson's wide-eyed optimism, as larger-than-life and humane as it was last year, that successfully leads the mostly similar ensemble alongside him through a torrent of energetic and challenging musical numbers to a conclusion of comforting vibrancy. I really can't say fairer than that - and neither can the Lyric Theatre audience, judging by their memorable response.

A co-production between British Youth Music Theatre and the Lyric Theatre Belfast, Paperboy runs at the Lyric until Sunday August 4.