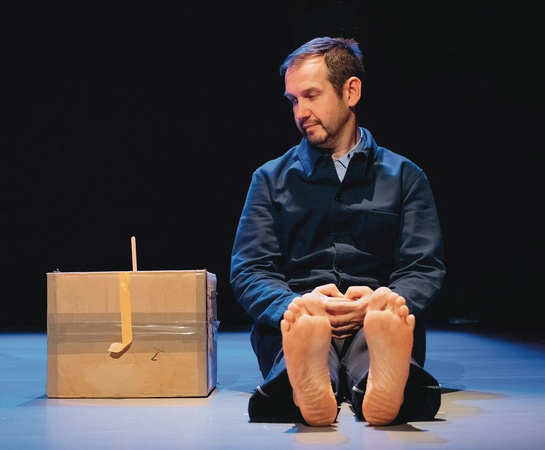 In the direct aftermath of Red Bridge Arts' Stick By Me, starring Andy Manley, I found it impossible not to immediately recall Toy Story 4 and the identity crisis of spork-y Forky. Here was a toy who didn't consider himself to be "proper", possibly because he felt like he didn't look the part on the outside. Yet he found he was the part on the inside - loved and given a personality by those who loved him. For Forky then, read sticky tape and wooden ice lolly sticks now - except with the stickiness of the ice lollies all but invisible, Manley's unnamed protagonist must stick by (get it?) those very objects, and play around desks and chairs, in an imaginative quest to find not only friends but also himself.

Starting with Manley's head appearing as if is uncontrollably stuck (there is a lot of sticking, naturally) to a desk, the pleasure in Stick By Me initially arises from the manner in which this endearingly weary but charmingly naive man tries to come unstuck from objects he has appeared to depend upon for some time, while discovering brand new objects to stick to - brand new objects that aren't that stationary. The smaller the object, the greater the capacity for invention in Manley's square play space, a kind of pen which he just can't break out of however hard he tries.

What will Manley do to turn the "No" he hears every time, from off-stage loudspeakers, when he reaches the edge of his playpen, to the "Yes" that he, and we, want to hear? The answers revolve around escapism and escaping - the escapism for the children in the audience in watching Manley strive to escape from his boundaries. Their eyes, and ours, stick to Manley while he desires to become unstuck from the stage, only to reach the contradictory conclusion of desiring both inner friendship and outer freedom. In this scenario, one seems as embraceable as the other.

In that sense, Stick By Me is kind of tragic - and always compelling. Manley and co-creator Ian Cameron successfully work with marvellously moody background music and pronounced sound effects to make the objects as alive as the human within, with barely a word heard barring those No's and Yes's. The obvious jibe of "wooden performances all around" from the lolly sticks Manley plays with is outright evaded by the exciting concepts he and Cameron come up with - it is the little things that matter in, and are made magical by, this forty-minute marvel that you can't help but be sad to see conclude.

Stick By Me is being performed at The MAC, Belfast, as part of the Young At Art Belfast Children's Festival. For more information, click here.