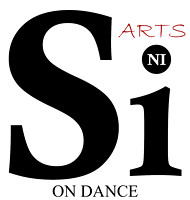 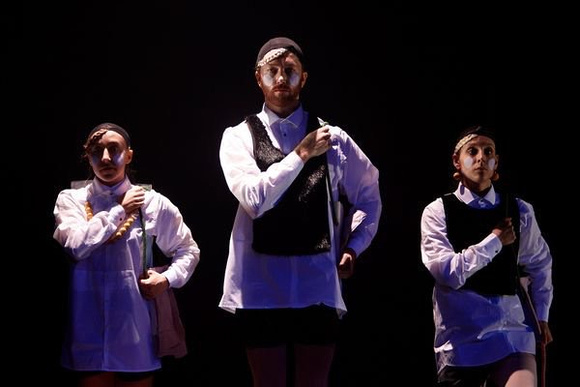 Wrong. That's a word used too often nowadays. How frequently have you raised a good point worth considering only to be shot down with "Wrong"? Not that it's valueless, but at the worst of times it illustrates an obstinate, arrogant single-mindedness. One which promotes taking sides, discipline and order ahead of everything else.

It is Maiden Voyage Dance's mission on every single one of their Maiden Voyages to break away from this train of thought, to present free thinking on a level appreciated by children and adults alike. And The Alien's Guide To Dance Gone Wrong, choreographed by Lea Anderson and performed by David Ogle, Vasiliki Stasinaki and Hannah Rogerson, is more than exemplary in achieving its aims... it is also arguably the best work I have ever seen performed by the Belfast-based dance company.

Hearing "Space Oddity", "Rocket Man" and "Life On Mars" pipe out from the speakers while the audience of all ages take their seats upstairs at Belfast's MAC is as good a way to set the stage as any. The stage, such as it is, is set up as a giant square area on the dance floor, specifically marked by white tape for our visual needs. Tim Spooner's deliberately tacky costumes and Steve Blake's even more deliberately tacky music – there's a point to these, bear with me – set us up for a future, a where aliens rule the Earth and wonder how we humans used to dance.

The next forty minutes will be about how the trio of "aliens" – Ogle, Stasinaki and Rogerson, of course – conduct, embrace and synchronise with each other in and out of the "square of action". From this arises mesmerising movement and remarkable intelligence.

At the heart of Anderson's choreography and the work of the three dancers, less athletic than usual but no less entrancing, is a message that is anything but alien – the danger of human closed-mindedness. The desire for leaders to follow, heroes to emulate and plans to make is today emphasised to the point of a mania for control, life viewed through the distorting lens of fear where little can be created without the worry that it will go "wrong".

That's why "wrong" does not exist in the interpretative world created by Anderson and implemented by Maiden Voyage – what we see here instead is a concoction of perceptions in line with the polyvocal theatre also explored at this year's Belfast Children's Festival by Prime Cut and Cahoots.

And what a wealth of ideas these perceptions present. The idea of Maiden Voyage deconstructing popular culture through the prism of style, fashion and science-fiction is so rich in potential that I am astonished I haven't seen anything like it before. The trashy, almost monochromatic space-suits, pasty make-up and small flashing lights, alongside a combination of disco and new wave music, echoes absolutely everything presented in the sci-fi and dance boom around the time of Saturday Night Fever, Close Encounters, Star Wars and Star Trek: The Motion Picture. There's even something akin to a catwalk strut thrown in for good, or bad, measure. Yet as cringey as these movements and moments seem, they were our movements and moments, the very bedrock of a culture and style that defined and reflected a generation who felt no shame in their desire to express.

This is why The Alien's Guide To Dance Gone Wrong is vital – it's a giant middle finger to obsessive logic and fussy stateliness, to the nit-picking buzzkills popularised by YouTube and forums. It is important to dissect and analyse for purposes of understanding, but not at the expense of a creative atmosphere. What's "wrong" – and is it? - is essential to our personalities, and should be cherished and learned from. Forget sterility, let's dance – no matter how we might look in the eyes of our peers. If that isn't liberating, I don't know what is.

The Alien's Guide To Dance Gone Wrong was staged at The MAC, Belfast, as part of the Young At Art Belfast Children's Festival.