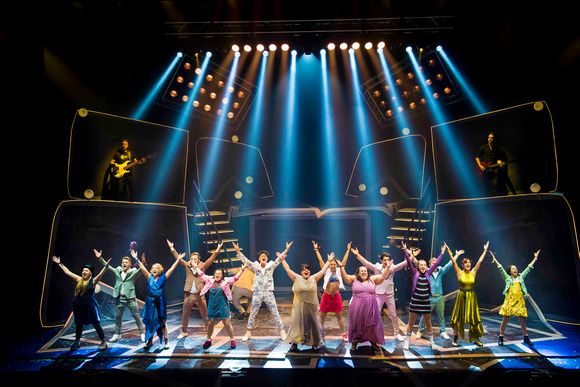 Without being too hyperbolic, Tim Firth's The Band seems destined to become a minor cult classic. Less stage show than communal event, with a series of all-too-familiar tunes and even more familiar characters, it has shades of Mamma Mia, The Full Monty, Calendar Girls and School Of Rock in not merely likeability but in the same dubious yet somehow worthwhile message that a bit of irresponsibility is required to be responsible. You need to live a little – to blend the mundanity of the present and the uncertainty of the future with the joy, and even a little pain, from the past. And The Band grasps this.

Rachel Lumberg shines as central character Rachel, the wistful partner of Jeff (Martin Miller) who happily and sadly reminisces about what her younger self (Faye Christall) got up to with her schoolfriends Heather (Katy Clayton), Claire (Sarah Kate Howarth), Zoe (Lauren Jacobs) and Debbie (Rachelle Diedericks) during their teenage years. As far as plot goes, there really isn't that much of one – The Band is driven by the girls' conversations among their younger selves and misadventures among their older, middle aged selves (among them the impressive Jayne McKenna, Alison Fitzjohn and Emily Joyce) as they and a supporting band of five lads who aren’t Take That – rather, the winners of the BBC's Let It Shine - sing a series of popular songs by the still popular Manchester boy band.

It takes a little time for the songs to tune in with the narrative. Sometimes the male cast members, and not just the band, appear to exist in a vacuum. But when the story takes an unexpectedly tragic turn, The Band picks up in heart and pace, at times soaring quite high. The set design – especially a glitter ball projected onto a plane's nosecone with the help of video mapping – is brash, colourful and creative. The jokes are deliberately, and on occasion irresistibly, tasteless and rarely less than funny. The banter among our females, especially their older equivalents, is sneakily charming. And the energy, barring a few well-timed, quietly reflective interludes for character development, is manic.

There is poignancy among the power in a musical which never mentions Take That but very much mirrors the story of Take That – the unification of a group of friends over music, a group who survived tragedy, went their separate ways, rebuilt their lives, reunited and literally relit their fire through the core of what brought them together to start with. It's the joy and pain of the school reunion on stage – realising that you will not be young forever but that you can learn from where you were and where you are to head towards where you're still to be. Our trips down memory lane can be a hindrance but they can also be an inspiration to love and live – a message we're all the wiser for learning in an enlightening and entertaining jukebox musical.