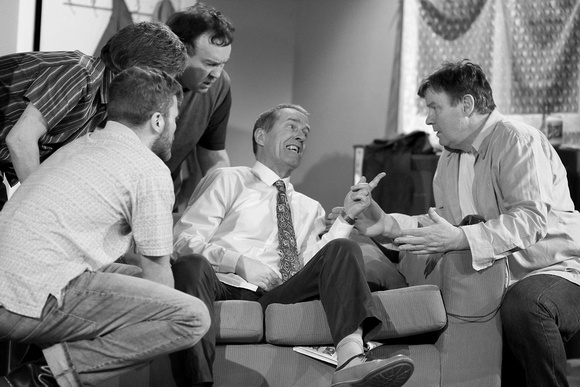 It's the simplest of concepts. One guy's a Catholic, one's a Protestant. One's an easy-going slob, one's a clean freak. Both are separated from their wives. And while they may be quite comfortable living in their own little bubbles, they're like the oddest of Odd Couples when living together.

If you're thinking of a certain Neil Simon play, you have the right idea – the plot and the majority of the characters' names are effectively the same, beat by beat. But opportunities for fresh comedy in Liam Campbell's script, adapted to take place in the Bogside (hence The "Bog" Couple) during the height of The Troubles in Derry-Londonderry, are numerous – the commendable efforts of the two leads and the smooth hand of director Kieran Griffiths see to that.

After surviving an inconsistent opening where a generally ornamental ensemble have a go at (and to their credit, mostly succeed in) obtaining rapid-fire humour as a group of older Derry Boys Behaving Badly, the play finds a surer voice once Gerry Doherty and Pat Lynch get into their stride as the titular couple. A series of insults blossom into a genuine understanding while we, and the supporting cast, relish and thrive from the duo's verbal and physical comic talent.

Yes, it's not much more than an extended sitcom – attempts to transcend the fun for something more serious don't really stick – but both Doherty and Lynch are so enjoyable to watch, and the overall buzz is so positive, that you're virtually guaranteed to leave the venue smiling. For there's no better medicine for troubled times, then and now, than laughter.