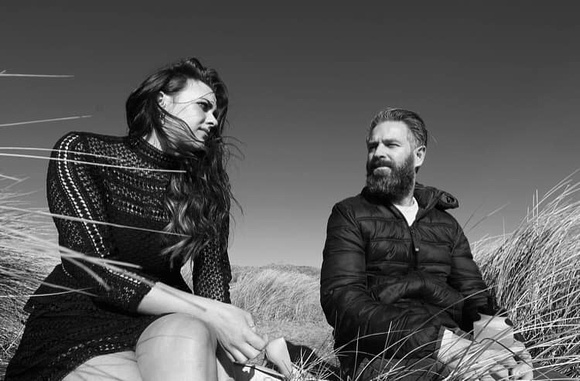 It is the worst of times but also the best of times in Rob Hollway's The Painted Lady, a tale of two personalities directed by Rachel Coffey and staged at Belfast's Accidental Theatre.

Inspired by real events, this brief encounter is about being found, rather than lost, in translation of language and landscape, for a duo divided by age and appearance but united by butterflies and bubbles.

The butterflies are a species: the painted lady itself, otherwise known as vanessa cardui, a colourful thing of beauty and a joy forever in the minds of the middle-aged man and young woman in the play. The bubbles are an emblem for entrapment, dual isolation enforced by external pressure against internal will, and stung - popped open - in a field of stinging thistles. A plant of survival for an insect is a rebirth, of sorts, for people.

One of whom, Kimberley, has clearly hit rock bottom as we open the play. Played by experienced actress Debra Hill, this bedraggled, heel wearing, cocktail-dressed party lover is on the verge of awakening from a hangover when Dan, played by Hollway himself on his acting debut, stumbles into her. She's on private property, the Irish nature reserve where Dan researches the titular butterfly and so much more – but all she can think about are her shoes. And her bag. And her make-up. And, as we will later learn, the memory of another butterfly from her youth...

What follows are a series of exchanges in and out of doors, brought alive by Sarah Melotte's gorgeous light and sound on a set of sand and shells, and by Hill and Hollway's naturalistic acting. Not a great deal about their compelling conversations is friendly – similarities can repel like opposites attract, especially when two people don't realise said similarities. What we get instead is laden with cynicism, anger and resentment, on the verge of, but never, poison – a mood not unlike the Brexit shambles. (Not a coincidence, perhaps.)

Dan's mindset, lonely among a sea of butterflies with only a photo of his disappeared daughter and a Shrek DVD to keep him company (an inspired choice, what with Shrek's own enforced loneliness) is entirely understandable. He's not a typical peace-lover, more someone who enjoys having his own mind at peace in the aftermath of a familial crisis that no amount of money will rescue him from. He is pivotal for bringing the personality from Kimberley's shell, an immense challenge of understated and sometimes overstated emotion which Hill masters beat for beat. Elements of Derry Girls' Erin and Michelle, faux tough girls with "you're fooling no one" vulnerability, find their way into Hill’s portrayal, the epitome of "under the skin" acting where you're not playing a role, but are the role.

The short-term comforts of the play's "other" painted lady (well, she paints herself with make-up) hide the gradually revealed long-term discomforts of a tainted lady who, we find, can't escape the demands of her abusive boyfriend's authority. Like Dan, Kimberley's only release rests in nostalgia, the very sort that reassures and damages at once. For how can we move forward if we keep lamenting what could have been but wasn't, instead of imagining what could be?

It's not all downbeat, though. Moments of positive pathos, and light humour, are also to be found on the pathway to a cautiously optimistic finale where our guy and girl, unlike in Once, finally reveal their names. There is every sense that what faces Dan and Kimberley will not be a bittersweet parting of the ways, but the beginning of a beautiful friendship.

The Painted Lady ran at Belfast's Accidental Theatre from April 4 to 6.