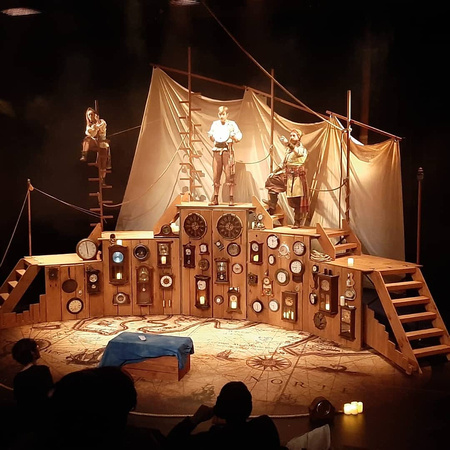 In veering away from the cultural touchstones of Peter Pan, that is to say, Lost Boys, shipwrecks, mermaids, crocodiles and pirates, and instead focusing mainly on time, adventure and above all family, writer David Morgan and director Janice Kernoghan-Reid have set themselves a very difficult yet fascinating task with Replay Theatre Company's The Untold Truth Of Captain Hook. Is it possible, in the space of an hour, to freshen up JM Barrie's legend and propel an audience from the age of seven into a state of lively levity?

Without the slightest hesitation, I am happy to say that it is.

The brilliance of Morgan's script is in structure and acting, and how Reid, set designer Diana Ennis, costumer Susan Scott and performers Gary Crossan, Chris Grant and actress-for-three Niomi Liberante bring it to life. As with The MAC's A Christmas Carol, or indeed any of her sets, Ennis has spared no expense, cramming in as much detail as she can onto the floor of the Lyric Theatre's Naughton Studio. Clocks, stopped and moving, are everywhere on the shape of the tall ship that dominates the stage, highlighting how time may stop for one mythical figure but will not, in general, wait for everyone. Doors and passageways open with mysteriously, attractively coloured but potentially deadly light, raising the stakes for characters who are looking to live an awfully big adventure, whatever kind of adventure that is.

Those characters would be James (Grant) and Peter (Liberante), brothers united by distinctly buffoonish rapport but divided by height, vision and ambition. After the death of their mother and the disappearance of their father (Crossan, in another role) leaves them scared and lonely, everything, including how their lives will be re-shaped into those of who they will ultimately become, is down to their imagination, wit and survival instincts. All of which are slyly narrated upon by Crossan, in a genial and funny manner that echoes The Great Gonzo's Charles Dickens. Christmas may be gone, but we're not too far removed from the wide-eyed awe expressed by children everywhere during that holiday season, which, given the youngsters in attendance, is entirely fitting.

Fitting, and perfect, for the dependable Crossan, but also the exceptional Grant and Liberante. While the former successfully and compellingly paints James as a boy forced to look within and almost entirely re-evaluate his outlook, the latter is a force of nature on three fronts. Warm and winning as Peter the adventurous idealist, Liberante vigorously and subtly re-invents herself as a lonely Lost Boy named Rupert and an Elderly Blue Riding Hood selling fruit that you'd rather not touch. It's one of too many highlights in a near-masterful start to this year's Belfast Children's Festival, a merry and memorable re-energising of a classic.

The Untold Truth Of Captain Hook is being performed at Belfast's Lyric Theatre as part of the Young At Art Belfast Children's Festival until Tuesday March 10. For more information, click here.