BIAF 19: The Worst Cafe In The World 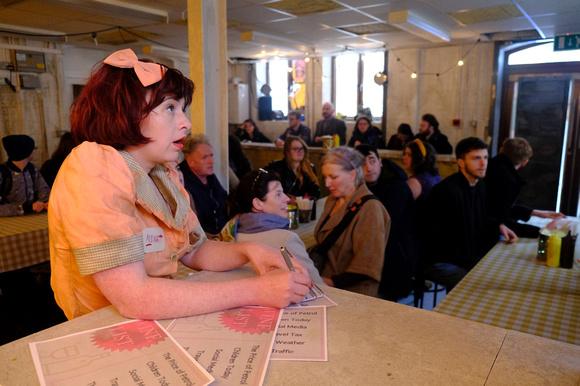 Nicky Harley in 'The Worst Cafe In The World'. Production Photo: Peter Nash

Every time I go to see a Big Telly Theatre Company play, I expect to... well, here's the thing. I can't finish that sentence anymore. Because the word 'expectations' is anathema to Zoe Seaton and her talented troupe, who keep coming up with dramatic and comedic confections that defy all theatrical convention.

So rather than go into dramatic detail for my take on The Worst Cafe In The World, which is really anything but, I'll just try and cut to the chase. Take The World's End, halve its length, cram it in a bunker, open the windows very slightly, seat the audience at tables, invite them to take part, let in beams of Eternal Sunshine and sprinkle a little bit of Monty Python on top and even then, you wouldn't quite be able to sum it up. You'd only have the gist of it. Seaton and company, among them music man Garth McConaghie, co-writer Vittoria Cafolla, costumer Ryan Dawson and the cast of Keith Singleton, Christina Nelson and Nicky Harley (phew), have taken a traditional restaurant menu and rewritten it as today's Never Ending Story of a contemporary Meaning Of Life, an entirely unorthodox take on a dystopian near future with a permanently unresolved Brexit. (That's a mouthful, isn't it?)

Freshening up themes like the dangers of social networking, the choice to discard memories and replicants is a triumph in itself, but Big Telly's skill with wordplay and improvisation is arguably exercised like never before here. Imagine a cafe where nothing concrete is eaten but where plenty of substance can be chewed on - think a cheesy strip, wines (sic) like Children Today and The Price Of Petrol, missing the "catch of the day" and a meatloaf that would do anything for love (groan). And that's just for starters... there is music, mime and a bit of Cahootsian light and magic to come before a main course of fleeting heart and eternal darkness where memories are controlled, altered, deleted or possibly all three. It is, in short, mental contamination, concisely packaged for our viewing and participative pleasure.

The Worst Cafe In The World ran at the Belfast International Arts Festival 2019 from Wednesday October 23 to Sunday October 27, and plans to tour Northern Ireland in March 2020.