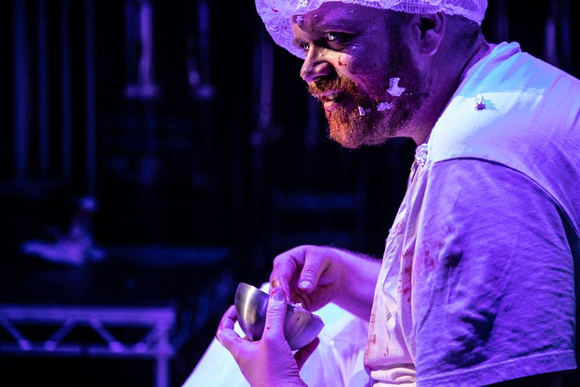 Argentinian football romantic Jorge Valdano once lamented the control-obsessed managers in the "beautiful game". His belief, it seemed, was that if a leader could unite enough people behind a cause, they would tell you a turd on a stick was a work of art – and if you heard it enough times, you'd believe it too. That a turd could be polished after all.

Such thoughts are central to Patrick J O’Reilly's Ubu The King, adapted from Alfred Jarry's French absurdist play Ubu Roi. Execrable in narrative but kind of excellent in every other way, Ubu is baffling, bemusing and brainy in depicting and dissecting anarchic antics which find themselves all too relevant to equally anarchic current affairs.

Rhodri Lewis is a literally heavyweight presence as Ubu himself, a gluttonous slob who takes control of a patisserie after usurping the head chef (Tony Flynn) and convincing its workers (Julie Lewis, Claire Connor and Jo Donnelly) that he'll make it great again. Having played the right trump and Trump cards, Ubu starts gobbling up everyone's wares himself in the middle of the theatre floor while we, a small audience on all four sides, try (and fail) to avoid being splattered by a food fight with kitchen utensils. Luckily, we have hairnets, overalls and Katie Richardson music to reassure us.

It’s every bit a revolution gone wrong. The promise of freedom from restrictive bureaucracy dissolves into rubbish, to the point where Ubu packs his own faeces as quality goods. (Turd rate.) But if excessive freedom is problematic, so is excessive control – balance and open-mindedness are required, which Ubu seems incapable of. I think the most positive message here is that if Ubu can't be saved, perhaps we can be. There is optimism within the despair. I'll more than take that.