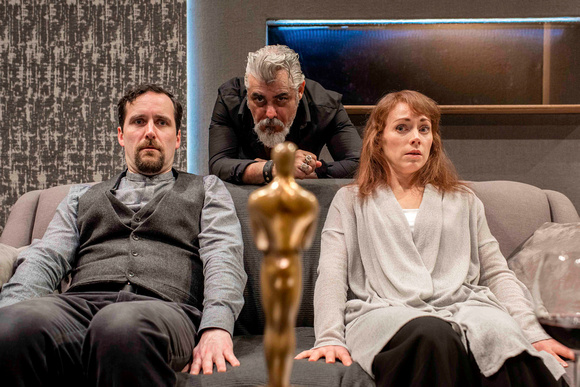 The perils of pride and prejudice explode into a verbal and physical bloodbath in David Ireland's Ulster American, an intelligent, satirical, triple-pronged deconstruction of parochialism and liberalism. It's as much about art forms as identity and gender politics, an American Oscar-winning actor (Darrell D’Silva), an English theatre director (Robert Jack) and a Northern Irish playwright (Lucianne McEvoy) coming together, or not, to claim conquering and bragging rights in an artistic and political kingdom that is anything but united.

Everyone in Belfast's Lyric Theatre laughs heartedly, and rightly so – Ireland's script, director Gareth Nicholls and the cast keep things moving at a breakneck pace, frequently triggering sublimely energetic, reactive outbursts and impulses which hammer home the humour and the messages. But this apparent lack of subtlety – there’s even a sledgehammer on the poster, and it's not hard to guess what the actor’s Oscar represents – is an asset.

For in a sense, Ulster American is part Quentin Tarantino, part Mel Brooks, with pathos to be found not in the moment but the sober, contemplative reality which follows. It is, without going into too much detail, an intense illustration of deadly extremism - insecure desire for acceptance of one's ways, on all sides, igniting fires which burn everyone within. The insularity of Ireland's characters is as inspiring to them as it is destructive, the concerning centrepiece of closed minds mistrustful, or worse, angry at anything around them that remotely challenges who they are.