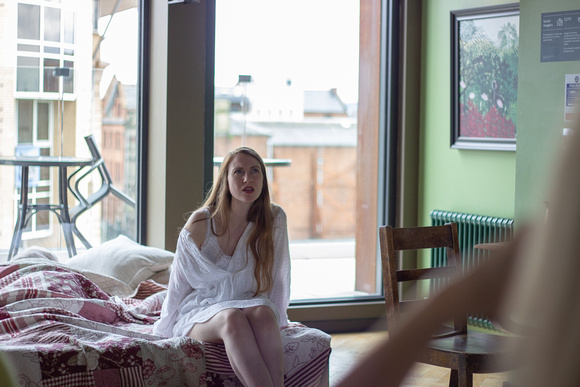 A miniature exercise in physical and emotional intimacy underneath and above the bed clothes in a bedroom, Conor Maguire's adaptation of "Yes", Molly's Soliloquy, from Ulysses Chapter Eighteen, is a compact, concise example of performance art, the writing of James Joyce parlayed into examples of comfort in routine and vanity.

The one-woman, one-hour show features a vigorous performance from Louise Parker. With her long hair, tall frame and ultra-pronounced delivery she threatens to dominate uncomfortably but instead gradually unveils an uneasy frailty. Neither oppressive nor condescending, Parker elicits an appealingly youthful frustration as she comes to terms with the production's intentionally incomplete story arc, one that reflects persistent dissatisfaction. Molly has a desire to be loved, but on her own terms only, driving her into an over-analytical state of mind when she could really do with an element of simplicity.

If there's something everyone can learn from this play, it's that the right time to sleep and dream is invaluable, and that there is such a thing as being too thoughtful or too active. Maguire has worked the play so as not to reflect only Molly but attitudes and ways of contemporary society: resistance to and enjoyment of the status quo, desire for both change and stability, having control and being controlled. It's fascinating and compelling in its numerous contradictions.

"Yes", Molly's Soliloquy was staged as part of the 2019 Belfast Book Festival at Belfast's Bullitt Hotel on Sunday June 16th, and was performed at the Crescent Arts Centre from June 17th to 18th.