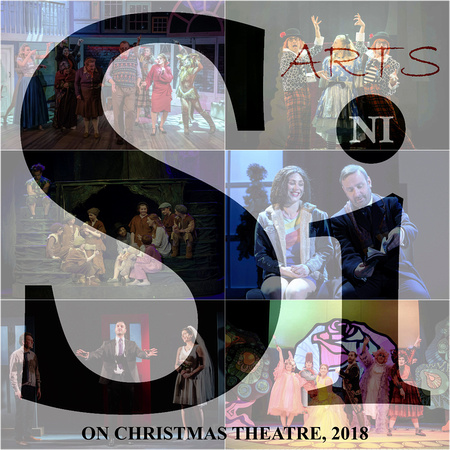 In many, many ways, 2018 was an exceptional year for Christmas Theatre in Northern Ireland.

Even as jingle and sleigh bells rang, winter wonderlands both real and imaginary were enjoyed and chestnuts roasted on open fires, the shadow of uncertainty which hung and continues to hang over the cultural and political landscape relentlessly permeated the atmosphere. It was almost as if the fear and doubt were challenging the best talent we had on stage in "our wee country" to act, make and play above themselves.

Fortunately for us, they did just that - every single show had something to see, something to hear, something to sing, something to laugh at or something to say. Or maybe even a combination of the five. In that, you have not only the spirit of Christmas, but Christmas with a bonus - a Christmas bonus, naturally. As well as traditional, and not-so-traditional, panto fun with May McFettridge in Belfast's Jack And The Beanstalk (scheduled to end tomorrow at the time of writing), Gordon Crawford in the Waterfront Studio's Beauty And The Beast, and William Caulfield in Derry-Londonderry's Peter Pan, you had Julie Maxwell & Caroline Curran doing very interesting things with Jimmy Stewart's finest two hours or so, Maria Connolly & Mary-Frances Doherty returning to lampoon two very well-known lady politicos as only they could, Conor Grimes & Alan McKee taking on A Christmas Carol, and both Paul Boyd and Cahoots NI dazzling the Lyric and the MAC respectively with exceptionally entertaining and enriching children's shows.

I emphasise "enriching", as it was in the hands of Boyd, and Cahoots NI's Paul "Bosco" McEneaney, that Christmas Theatre transcended its basis as pure entertainment (as it was in the beginning, is now, and hopefully ever shall be) and became deeper, more rewarding, more troubling, even.

For those of you lucky enough to have seen the Lyric's Alice: The Musical, and the MAC's The Elves And The Shoemaker, what made them do so? I put it down to two moments. The first, where the crown of Wonderland hangs tantalisingly over the head of Alice herself (Ruby Campbell), who really only wants to go home. The second, a momentary seasonal realisation for a despicably nasty yet all-too-human landlady (Emer McDaid). Brought together as epiphanies for heroine and villain, yin and yang, they say more about the value of comfort and unity of Christmas than you can imagine. The burgeoning of one character and the redeeming of another played their parts in transforming each play to great theatre full stop. Did you maintain a dry eye when you contemplated, or saw, either moment?

It would be easy to dwell on those, and all the other numerous positives of the holiday season, and say that I had "no regrets". But I do have a few. The delights of the Armagh (Aladdin) and Ballymena (Puss In Boots) shows were sadly missed, as was Chris Robinson & Tara-Lynne O'Neill's sold-out On The Shelf, to name but a thimbleful. There were even very popular shows at The MAC and the Crescent Arts Centre that didn't get a look in.*

There is also, of course, that especially uncertain future to consider. Yet in contemplating this, I was simultaneously inspired when choosing my best shows of the season**, triumph through adversity and all that. I thought about the challenges that not only me, but everyone else had faced - not merely putting words down on paper or bringing theatre to life, but in making what we were doing relevant as well as popular. To have all boxes ticked off repeatedly in a manner surpassing anything I'd previously seen in Christmas Theatre was more than a surprise. It was a joy. Christmas isn't just about giving and receiving - it's about coming together whatever the circumstances. And realising that, even only briefly, we really can all live wonderful lives and learn what a shame it would be not to take the chance of building on them in the New Year. That, I guess, is what Resolutions are for.

*Also, having Baby Shark (do do do do do do) stuck in your head all holiday... but that is the smallest of prices to pay.

**Here are my list of nominees for the Si Arts NI Christmas Awards 2018, originally named and broadcast on December 31, 2018.

Winners in bold and italic. Links to full reviews, either here or at The Big List NI, where available.

Best Comic Set Piece
Nothing Here Makes Sense, Alice The Musical
Squeezing The Bitterness Out, The Elves & The Shoemaker
Tea For All, Alice: The Musical
Snow White & Goldilocks In Trouble, Beauty & The Beast
Lily The Pink, Bah Humbug!