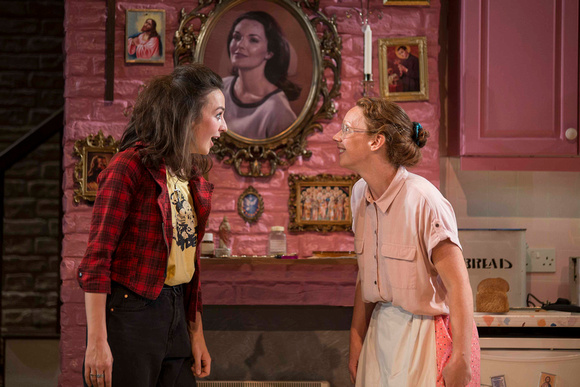 Piety, anarchy, sisterhood, fatherhood and a soundtrack featuring some of the best tunes of the 1980s converge for Meghan Tyler's Crocodile Fever, a tempestuous and tragic ode to connection after isolation. This frankly crazy play, directed by Ulster American's Gareth Nicholls, defies every kind of pigeonholing imaginable by never letting up in pace and imagination.

Crocodile Fever's ultimate message seems, on reflection, to be directed towards the after effects of both enforced and unenforced levels of uncertainty avoidance, as separate responses to a troubling past. We are in awe of Grace Smart's set (as I often have been by her work), but what to make of its faded pink colour and hue? Is that the calm that Alannah (Lucianne McEvoy, excellent) wants to enjoy? Or is it bland and beige, in need of the splash of vibrant red that only Alannah's rebellious sister Fianna (Lisa Dwyer Hogg, also excellent) can provide?

Tyler, director Nicholls and the cast don't pull any punches, tossing traditional structure away to repeatedly, relentlessly tickle us with pop culture references, a chainsaw, crushed Tayto crisps, sawn off legs and even a giant crocodile. (It's puppetry, don't worry.) Fianna grows a conscience while Alannah becomes the hybrid between Stephen King's Carrie and her mother that no one wants to see. All discipline and order is dissected in favour of a new kind of siege mentality - insulated, haphazard chaos against the world. It's like freedom from culture through a unique kind of counter culture, a distinct insight into mental health via different aspects of craving and coping. No one may fully understand it, or even want to, but one thing is for sure - we're all along for the ride. And the effect is unforgettable. You really do leave Belfast's Lyric Theatre in a state of shock.