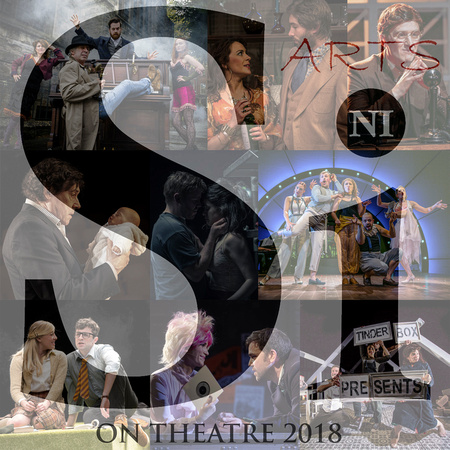 All's Not Fair In Love And War.

So I claimed, at least, when I initially sat down to pen the short script for what would become my video review of the best theatre I saw in 2018. The question is: whose love? And whose war?

Everybody's, really. If ever there was a case for illustrating theatre as an enormous psychological examination of human brains and bonds, the connections we need and the battles we face to simply keep going, 2018 was it.

Increasingly affected by a multitude of unresolved issues, destabilising developments and the uncertainty that a looming Brexit brings, the casts and crews from "our wee country" and beyond sought to grasp, examine, and illustrate the inner and outer turmoil of the populace and present it as an experience to remember, either immersively or as an observer.

There was no shortage of theatrical magic in the air, but there was also darkness, and not one of my favourite plays of the year shied away from either. Because, if you'll indulge me for a little bit, I've been able to spend the last twelve months, if not more, doing things I would never imagined possible. I've watched the arts community of Northern Ireland push themselves that step further to conquer ever-pressurising boundaries in theatre. So many rewards for the head, heart and soul.

And their goals have been about more than consistency and stability. They're about emotion and evolution. Evolving in writing about, working on, acting in and being part of extraordinary work which enlightens and entertains. Work that also delved into the benefits of nostalgia and anti-nostalgia, the latter of which the late, much beloved Sam McCready, one of my nominees, elegantly personified in his last ever role of Robert Harbinson - a performance that, like so many of McCready's at the Lyric Theatre and more, will be fondly recalled by everyone who witnessed it. What I heard then, and what I hear now, about his remarkable body of work helps to enhance my belief that theatre in Northern Ireland will continue to enrich and inspire participants and audiences as not only a way of life, but as a friend for life.

That, after all, is what Good Vibrations can do - and did do, at the very theatre McCready co-founded.

Winners in bold. Links to full reviews, either here or at The Big List NI, where available.

BEST IN STUDENT AND TOURING THEATRE

BEST IN DANCE, BALLET AND OPERA

Best Dance Piece
Each For Other, Maiden Voyage

Best Ensemble, Opera
If You Can Find Me
Honourable Mention: Rigoletto